Antibiotic guidelines for the neonatal unit

This guideline is applicable to all medical, nursing and midwifery staff working with neonates in West of Scotland.  Prevention of sepsis is important and all staff should be familiar with other guidelines relating to hand hygiene and aseptic technique.  Staff should also refer to West of Scotland Neonatal MCN guideline for Early Onset Sepsis in the Neonate, and to the relevant pharmacy monographs for medications referred to in this guideline.  It is important to remember to liaise closely with microbiology and infection control departments.

Streptococcus pneumoniae - Maternal vaginal colonization with S. pneumoniae is rare (0.11%), but associated with a high risk of infection in the newborn.   Intrapartum prophylaxis with benzylpenicillin as per Group B Streptococcus should be considered.(18)

Definition – Infection presenting within the first 72 hours of life.  Infecting organism acquired antenatally or intrapartum.  May be associated with chorioamnionitis.

The commonest organisms are from the vaginal flora

Cefotaxime should be avoided on the neonatal unit for empirical therapy.  It is associated with increased rates of colonization with strains resistant to the empirical therapy, with higher rates of Extended Spectrum Beta Lactamase (ESBL) infections, invasive candidiasis and death.(27)(28)(29).  However it should be considered in infants with meningitis –see below

Other conditions to consider

Once an organism has been isolated, the antibiotic should be rationalized to the narrowest spectrum that effectively covers the organism in the site it has been isolated from.  See below for specific organisms.

Consider repeat cultures and utilizing antibiotics for late-onset sepsis if there are ongoing signs/symptoms or rising CRP despite 24-48 hours of treatment.

Other conditions to consider

Once an organism has been isolated (assuming it is not considered a contaminant), rationalize the antibiotic regimen to the narrowest spectrum that effectively covers the organism in the site from which it has been isolated.  See below for specific organisms.

Consider repeat cultures if there are ongoing signs/symptoms or rising CRP despite 24-48 hours of treatment.  Central venous lines may need to be removed in Candidal infection or in Staphylococcal infections which do not respond to therapy

Consider stopping antibiotics after a minimum of:

The decision to stop antibiotics should be guided by clinical response and serial CRP.  If persisting symptoms/signs or abnormal CRP, consider:

Gram positive: use Cefotaxime.
Cephalosporin resistance is rare and microbiological advice should be sought in such cases.  Avoid vancomycin monotherapy as CSF penetration is variable (7–68%).(35)

Gram negative: use Cefotaxime and Gentamicin.

The adjunctive use of aminoglycosides for meningitis is controversial - CSF penetration in adults is poor, although it has not been studied in neonates.  Nonetheless, clinical studies show efficacy with “once-daily” dosing.(35) 1 centre has reported excellent outcomes with combination treatment for gram negative meningitis in neonates (uncontrolled).(36)

Use the standard combination as for late onset sepsis.  Metronidazole is usually added on the advice of our surgical colleagues where NEC is confirmed or where perforation has been demonstrated radiologically although those infants who are already on Tazocin or Meropenem should have sufficient anaerobic cover.

The emergence of extended spectrum beta lacatamase resistance has been associated with increased use of broad spectrum cephalosporins.  Outbreaks of multiresistant Klebsiella and Enterobacter have been described in neonatal units.(38)(39)  Mortality with such strains appears to be worse, not least due to the delay in initiating effective antibiotics pending laboratory identification.(8)(40)

Use Amoxicillin plus Gentamicin.

Although this is the most effective antibiotic regimen for listeriosis, the cure rate is only approximately 70%.  These antibiotics only poorly penetrate the cerebrospinal fluid and thus high doses given over a prolonged period of 2-3 weeks are necessary.  In difficult cases Quinolones (Ciprofloxacin) may have a role.(41)

Meconium staining of the amniotic fluid does not appear to be a useful indicator of Listeriosis where the incidence of infection is very low.(42)   It may be more useful to assess avoidance of soft blue or mould ripened cheeses and paté during pregnancy.

Use Flucloxacillin (except MRSA).

Rifampicin or Fusidic acid may be useful for difficult cases.

Linezolid has been used successfully in cases unresponsive to all other antibiotic regimens.  However, this antibiotic is poorly studied in neonates and should only be used in consultation with microbiology and after discussion with parents   See also Staphylococcus aureus, above.

These infections are often multiresistant, and even where sensitive may not respond well to treatment.  Any central lines should be removed immediately.  Ciprofloxacin* has been used for Acinetobacter with some benefit in unresponsive cases.(43)

The decision to use anti-fungal prophylaxis will be made on an individual unit basis informed by local monitoring of infection rates.

Empiric therapy for suspected candidal sepsis or where Candida isolated from culture is with Ambisome (liposomal Amphoteracin).  Fluconazole is also effective against most Candida species and may be used as an alternative therapy following determination of sensitivity.
Once a fungal septicaemia has been identified, remove any central lines immediately as a failure to do so increases mortality and morbidity.(33)(44)
For resistant Candida or poor response to treatment, seek microbiological advice.  Consider adjuvant treatment for immunodeficiency and surgery for large lesions.

Given that variations will be seen in factors such as protein binding and antibiotic sensitivity, before other adjuncts are considered always ensure that good doses of the appropriate antibiotics are being used, with good levels where measurable.

G/GM-CSF – no overall benefit is demonstrated for adjunctive or prophylactic use.(45)(46)(47)

* as guided by clinical response, blood cultures, and serial CRP. 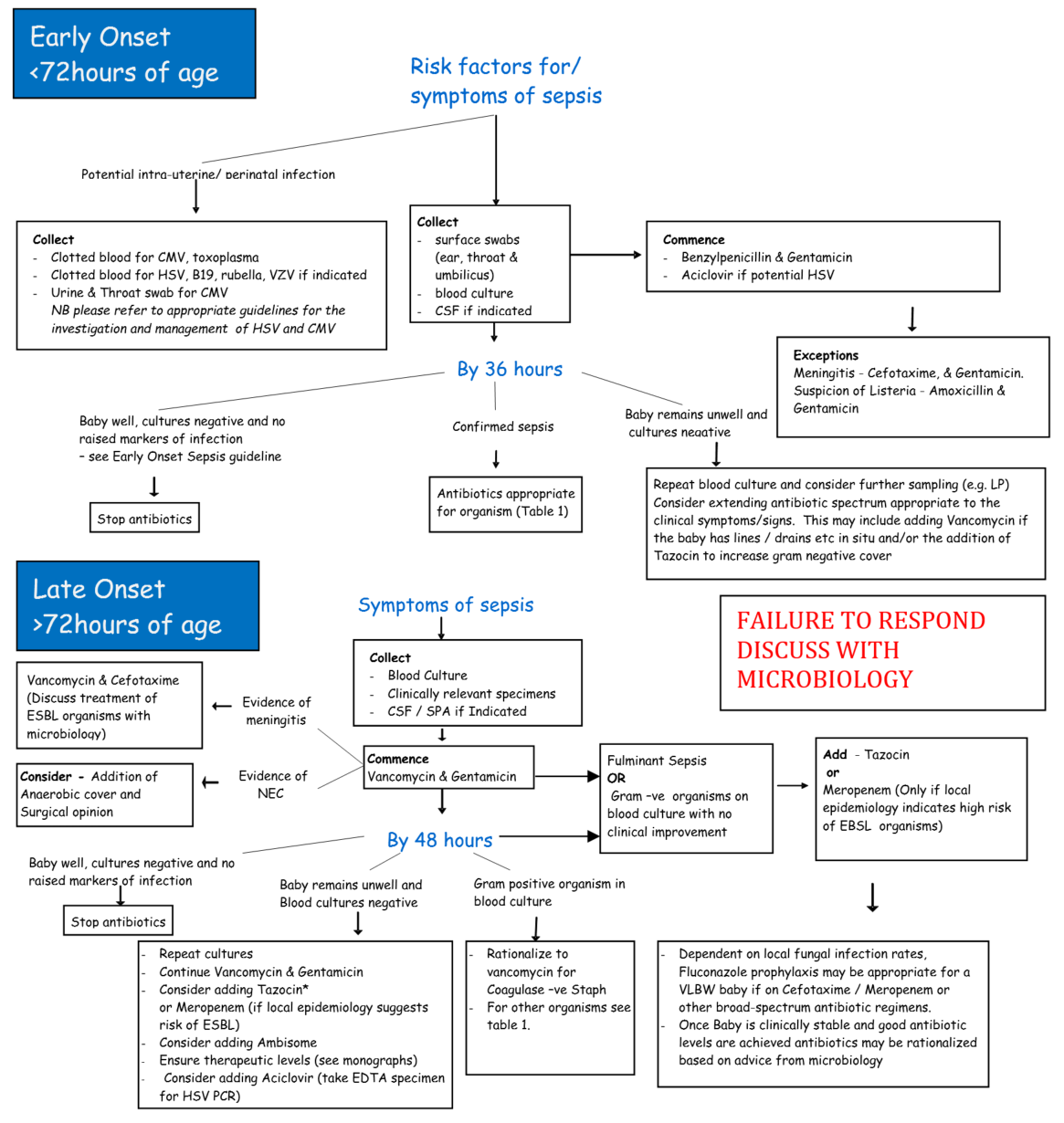 Duration of antibiotic therapy in infants without CRP rise and without positive culture.