This guideline was updated on the 20/3/19 to reflect the findings of the study by Anup 2019. Cord milking is not currently recommended in babies <28 weeks.

This guideline is relevant to all maternity departments in the West of Scotland.

Previously, cutting the cord immediately after delivery was widely practiced. Current evidence suggests that delaying cord clamping is safe and can confer benefits to term and preterm infants and is now recommended as standard practise. However, the evidence for DCC during immediate resuscitation is less clear.

The transition to extra-uterine life is a complex physiological process comprising several different mechanisms that must happen simultaneously.

In optimal circumstances, spontaneous breathing aerates the lung and leads to a fall in pulmonary vascular resistance and subsequent increased pulmonary blood flow1. This transition requires additional blood volume which is drawn from the low resistance placental circulation2. Immediate clamping of the cord interrupts this normal physiological process and can reduce venous return to the heart by 30-50%3, subsequently reducing cardiac output which can lead to circulatory collapse in the preterm infant4.  When cord clamping precedes aeration of the lungs this reduction in cardiac output could potentially result in reduced cerebral blood flow which has been shown to be associated with intraventricular haemorrhage (IVH)1.

Delaying cord clamping has been shown to result in a 20-30% increase in blood volume5,6. A Cochrane review in 2012 demonstrated that DCC in preterm infants can lead to improved circulatory stability, less need for blood transfusion, reduced incidence of necrotising enterocolitis and a lower risk of IVH7. Delayed card clamping is now recommended by the major resuscitation councils8-10.

BENEFITS of DCC for PRETERM infant include:

A recent meta-analysis including 18 trials with 2834 infants demonstrated a significant reduction in mortality (RR0.68 95%CI 0.52-0.90, NNT33)11. This analysis was heavily weighted on one study were the adherence to DCC was 73.2%. The majority of these infants received Immediate Cord Clamping (ICC) due to clinical concerns of the infant. It did not demonstrate any reduction in IVH or NEC as shown by previous reviews12.

RISKS of DCC for PRETERM infant include:

BENEFITS of DCC for TERM baby include:

RISKS of DCC for TERM baby include:

One of the contraindications to performing DCC is a requirement for immediate resuscitation9 and this is the most common cause for DCC not being performed in practice as reported in the literature12. Cord milking has been proposed as an alternative to DCC whereby placental transfusion can be achieved in 20s15, therefore reducing delay in resuscitation. Intact umbilical cord milking (UCM) is where the cord is grasped and blood is pushed toward the baby prior to clamping16. The exact technique varies between studies, a milking speed of 20cm/2s with a frequency of 3-5 times are most frequently described in the literature1.

A RCT comprising 197 infants <33 weeks comparing UCM to DCC have demonstrated that UCM is beneficial in infants born by caesarean section. These infants had higher SVC blood flow and higher RVO measures in first 12 hours of life, a higher Hb, better delivery room temperature, higher BP in first 15h and higher urine output in the first 24 hours18. This is potentially as more blood remains in the placenta at birth due to anaesthetic and surgical interventions interfering with active uterine contractions1.

N.B. A recent study comparing UCM to DCC 29 has demonstrated a significantly increased incidence of severe IVH in the babies under 27 weeks gestation (22% vs 4%).  No comparison was made between UCM and ICC however.  This raises sufficient concerns regarding UCM in the very preterm and we do not currently recommend this option.

Practice Point: As there is less evidence to support this strategy, it should only be used when there is an urgent need to commence resuscitation, for mother or infant, which precludes a delay of at least 60 seconds to allow a normal placental transfusion.

Resuscitation with an intact cord.

It is becoming increasingly recognised that timing on onset of lung aeration in relation to cord clamping has important physiological effects. An study in preterm lambs demonstrated ventilation prior to clamping cord resulted in improved cardiovascular function by increasing pulmonary blood flow before the cord is clamped and subsequently stabilising cerebral haemodynamic transition19. Observational studies in human infants have demonstrated increased admission, mortality20, CLD, and severe IVH21 if the cord is clamped prior to onset of breathing.

Practice point: This approach will only be possible in units where there are facilities to allow resuscitation to occur at the maternal bedside.

There is strong evidence that demonstrates DCC is beneficial and therefore performing delayed cord clamping for 60 seconds is recommended in all eligible infants.

When immediate resuscitation is needed the best method remains unclear. In this situation cord milking or resuscitation with an intact cord (if appropriate resources and trained staff are available) can be considered on an individual basis. Further research is required before these interventions can be implemented as standard practice.

Current best practice recommendations (for use during discussions with parents)

“A more liberal approach to delaying clamping of the umbilical cord in healthy term infants appears to be warranted, particularly in light of growing evidence that DCC increases early haemoglobin concentrations and iron stores in infants.  DCC is likely to be beneficial as long as access to treatment for jaundice requiring phototherapy is available”13.

“Do not clamp the cord earlier than 1 minute from the birth of the baby unless there is concern about the integrity of the cord or the baby has a heartbeat below 60 beats/minute that is not getting faster”24.

“In healthy term babies, the evidence supports deferring clamping of the umbilical cord, as this appears to improve iron stores in infancy. Jaundice may be more common after deferred cord clamping but this management is likely to be beneficial as long as phototherapy for jaundice is available. This assessment of the evidence is concordant with the Cochrane review and the recommendations by NICE”25.

All babies will be eligible for delayed cord clamping unless there is:

Other considerations for DCC

It is the position of this guidance to state that Delayed Cord Clamping (DCC) is the normal, physiological process that supports transition to extra-uterine life with Early Cord Clamping (ECC) seen as a non-physiological clinical intervention, supported by the best practice recommendations above.

As with all aspects of the care we deliver the provision of clear parental information, with opportunity for discussion and questions, is essential.  This should take place during the antenatal period, or early intrapartum period, and should refer to the best practice recommendations above.  Within the lower risk group (>35 weeks gestation), clear discussion of the risks, especially jaundice and its subsequent treatment and care, should be undertaken.  On consideration of the information provided parents may opt for the intervention of early cord clamping.  This decision should be fully acknowledged and supported by clinical staff.

It is recommended that staff training; resources to identify and diagnose jaundice; equipment to provide and manage phototherapy and inpatient/outpatient service provision should be available where DCC is undertaken.

There is no observed increased risk of PPH, or the need for manual removal of placenta, following DCC13.

Gravity and position of the baby during DCC does not appear to have a significant effect on the volume of placental transfusion achieved following birth at term26.  This would allow appropriate positioning of the baby to achieve skin-to-skin and may improve overall acceptance and achievement of DCC by parents and staff.  No studies involving preterm infants have replicated these findings therefore a sensible position should be observed (see procedure guidance below).

Both arterial and venous cord blood gas results may be altered, dependent on timing of cord clamping, making interpretation of results more challenging27.  Although the impact on these results is likely to be small, clear and accurate recording of when samples are obtained will be essential to support robust analysis and interpretation25.

Appropriate gestational thermal care of the neonate should be managed as per WOS MCN Guidance to ensure cold injury does not result from delayed cord clamping procedure.

In the PRETERM INFANT: <35 weeks gestation for purposes of this guidance.

In the TERM INFANT: 35+0 Gestation or above for purposes of this guidance.

The following flow chart has been developed for quick reference 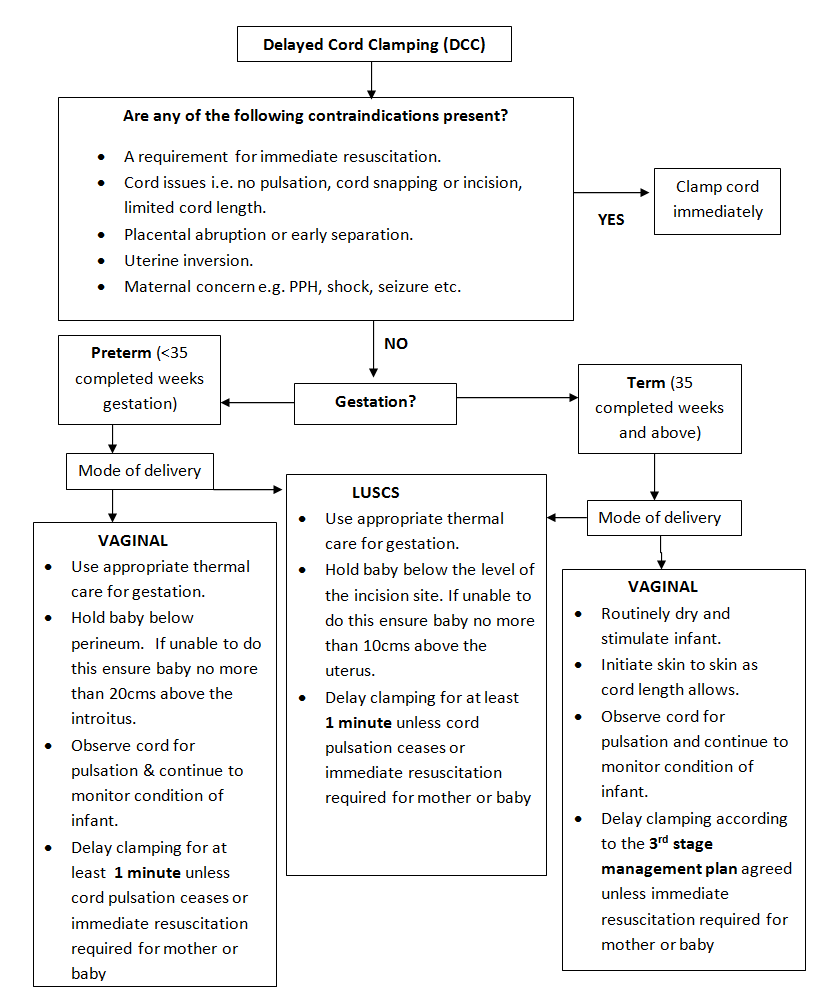 Practice Point: Administration of Uterotonic drugs should not be delayed during DCC

In the womb, the baby’s blood flows through the umbilical cord to and from the baby and the placenta bringing oxygen and nutrition to the baby from the mother’s blood. If the umbilical cord is left unclamped for a short time after the birth, some of the blood from the placenta passes to the baby (this is called placental transfusion) to increase the baby’s blood volume and help the flow of blood to the baby’s important organs including the lungs. For many years now, standard care during the delivery of the placenta has been to clamp the cord immediately at birth. This review looks at delaying cord clamping to allow more placental transfusion compared with immediate cord clamping. The other intervention considered is “milking the cord” which means the caregiver holds the cord and squeezes blood down the cord into the baby. In this review we have included 15 randomised controlled trials with 738 babies born prematurely between 24 and 36 weeks’ gestation by caesarean section or vaginal birth. These studies compared babies where the cord was clamped within a few seconds of the birth with those whose cords were clamped after a delay of at least 30 seconds. The maximum delay in cord clamping was 180 seconds. Providing babies with additional blood through delayed cord clamping or milking the cord before clamping appeared to help the babies to adjust to their new surroundings. Fewer babies needed transfusions for anaemia, the risk of bleeding in the brain (intraventricular haemorrhage) and the risk of necrotising enterocolitis (a severe infection in the bowel) were reduced. The trials had an unclear risk of bias and varied outcome definitions were used. Further studies are needed comparing methods of delivering placental blood to babies to see which has the most benefit.

Effect of timing of umbilical cord clamping of term infants on mother and baby outcomes13.

At the time of birth, the infant is still attached to the mother via the umbilical cord, which is part of the placenta. The infant is usually separated from the placenta by clamping the cord. This clamping is one part of the third stage of labour (the time from birth of the baby until delivery of the placenta) and the timing can vary according to clinical policy and practice. Although early cord clamping has been thought to reduce the risk of bleeding after birth (postpartum haemorrhage), this review of 15 randomised trials involving a total of 3911 women and infant pairs showed no significant difference in postpartum haemorrhage rates when early and late cord clamping (generally between one and three minutes) were compared. There were, however, some potentially important advantages of delayed cord clamping in healthy term infants, such as higher birthweight, early haemoglobin concentration, and increased iron reserves up to six months after birth. These need to be balanced against a small additional risk of jaundice in newborns that requires phototherapy.

Approved By: West of Scotland Managed Clinical Network for Neonatology