This guidance has been updated to reflect required fridge temperature for stored EBM of ≤4°C.

This guideline is intended to ensure that all staff within the Neonatal Managed Clinical Network (West of Scotland) understand their role and responsibilities in supporting parents to feed and care for their baby in ways which support optimum health and well being.

This guidance should be used in conjunction with local feeding policies and guidelines.

This guideline is applicable to neonatal, paediatric, nursing and midwifery staff working with neonates in the West of Scotland Neonatal Managed Clinical Network.

All staff are expected to comply with this policy.

Flowcharts for collection and storage (hospital and home) 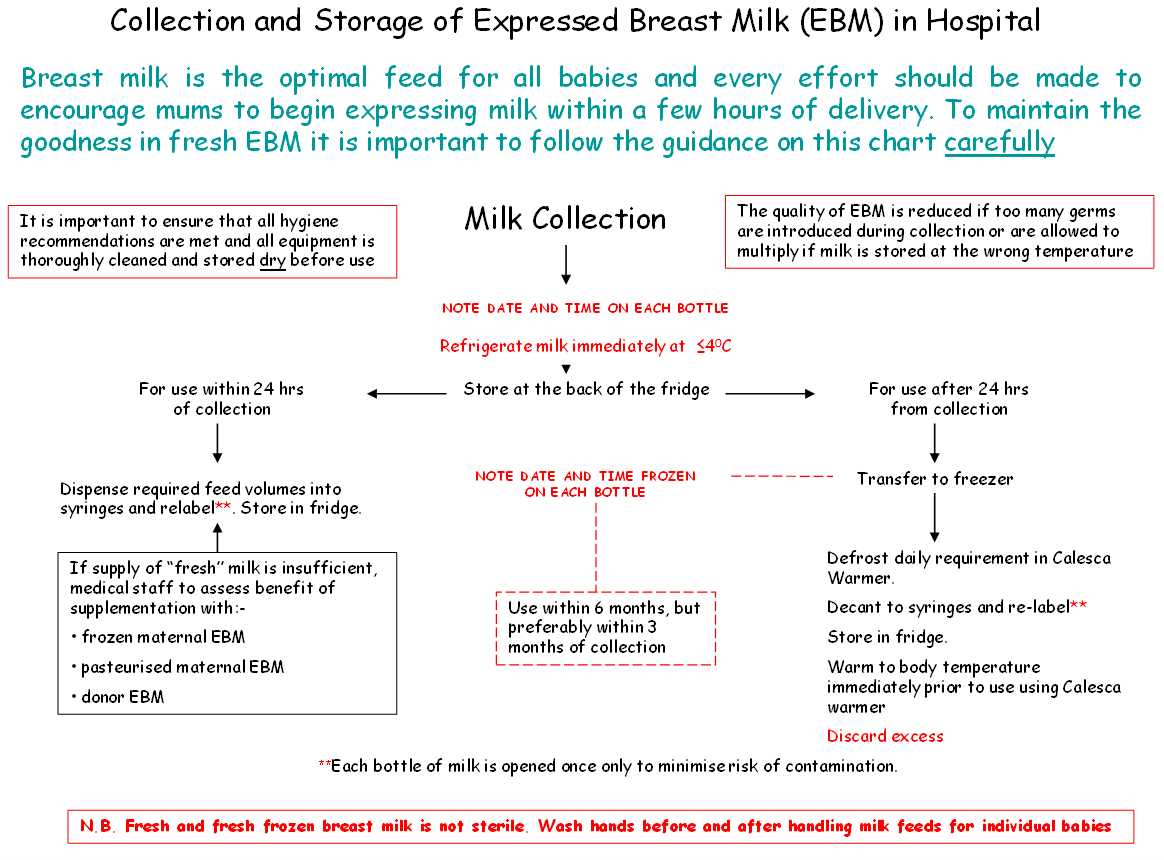 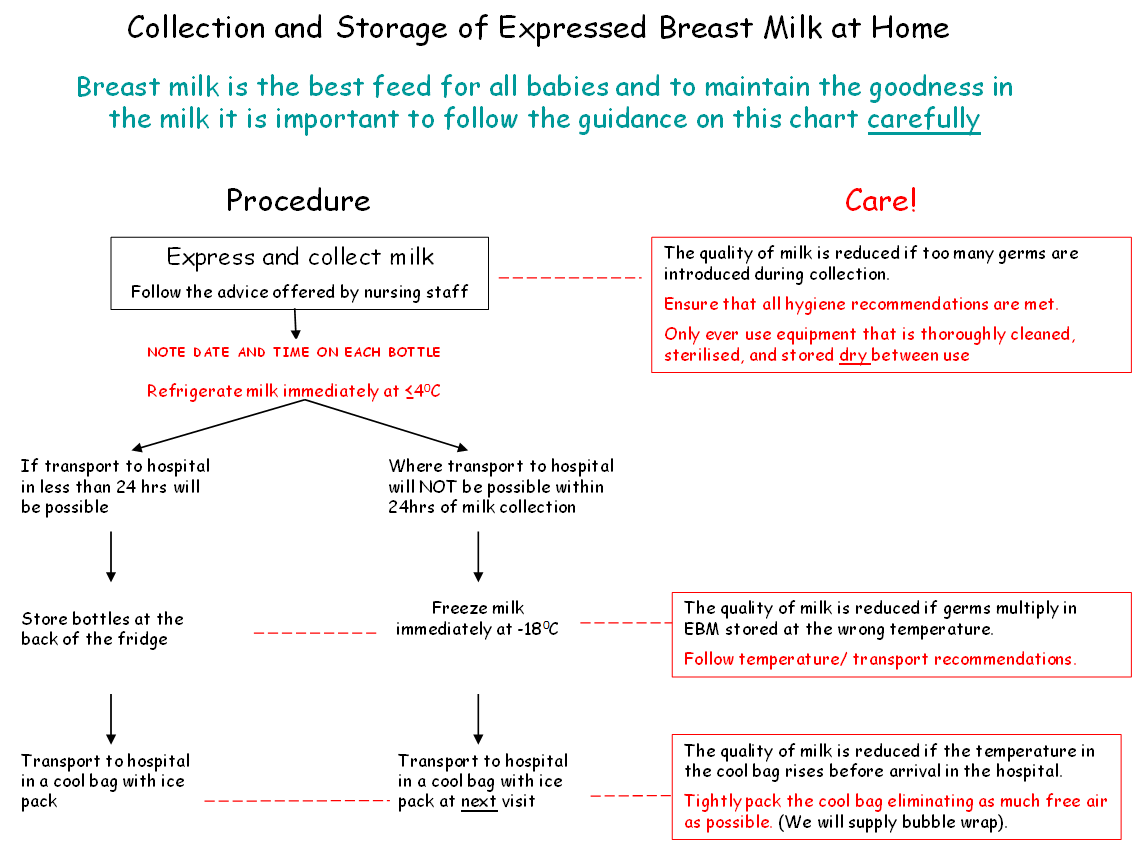 It is vital for mothers to start to express early and to express frequently and effectively to ensure a good milk supply and establishment of lactation.

The aim is not to meet the baby’s needs but to ensure future sufficient lactation. Within a few days many mothers of small babies will be producing much more than the baby initially needs.

Premature and ill babies are much more vulnerable to common bacteria and viruses which normally would not cause severe illness. Therefore attention to hygiene is essential:

NB- It is important to feed /use the colostrum in the order in which it was expressed.  This may be made easier by numbering the syringes as they are filled.

Following hand or breast pump expression of breast milk the milk collection kits should be thoroughly cleaned by one of the following methods, as per your local guideline:

Pump sets do not need to changed if being appropriately cleaned and stored unless damaged.

Storage and transporting of breast milk

The Recent Health Protection Scotland document “Guidance for neonatal units (NNUs) (levels 1, 2 & 3), adult and paediatric intensive care units (ICUs) in Scotland to minimise the risk of Pseudomonas aeruginosa infections from water "3 has indicated that it is no longer acceptable to defrost breast milk using water from a tap.

The following are methods of defrosting EBM which are permitted:

The major parental concern usually relates to possible transmission of infection. In practice the risk of infection is extremely low.  Only HIV, CMV, and HTLV viruses are known to transmit via breast milk (and HTLV is extremely uncommon in our population). No mother who is known to be HIV infected will be expressing and storing milk in the neonatal unit, and there is only a tiny chance that the mother will have seroconverted since she was screened on her booking bloods.  CMV commonly transmits via breast milk, although the act of freezing EBM destroys many of the viral particles, which will significantly reduce the risk of infection. Should CMV be contracted in this way, it may cause acute infection, but is very unlikely to have any long term detrimental effects (in contrast to prenatal infection).  Infants contracting CMV postnatally are not offered any antiviral medication (except in the rare instance of a significant systemic infection).

The consultant will speak to the parents and apologise for the error in an appropriate manner.  The parents should be reassured of the very low risk of infection using the information above.  This information may include reassurance that the donor of the incorrect milk was known to be HIV negative at the start of the pregnancy although it is important that the name of the donor is not revealed. This reassurance and apology may be all that the recipient’s parents require.

N.B. This reflects the advice given by the Centre for Disease control (CDC) in the US

Some parents may insist on further reassurance including further virological testing of the donor, (although this will require the consent of the donor).

If the parents insist that they wish further reassurance we would seek consent from the donor to repeat their HIV serology.  If, in the unlikely event that this test proved positive there should be consultation with the Infectious diseases team regarding appropriate post-exposure prophylaxis.

We would not routinely offer testing for CMV unless the recipient showed signs or symptoms of acute CMV infection (Note that the incubation period for CMV is 28-60 days).
N.B. If a postnatal infection with CMV were to occur it is more likely that the infection would have originated from the baby’s own mother rather than from a small aliquot of donor milk

Audit of adherence to guideline standards
Appendix 1: Use of donor milk for Muslim infants

Background: The introduction of anonymised donor human milk (DHM) to countries with Muslim populations has been challenged by the Islamic concept of milk kinship. Here the sharing of milk, historically in the form of a wet nurse, creates kinship ties and thus marriage prohibitions between the family of the donor and the recipient. Surveys in the United Kingdom have shown that these beliefs may affect the acceptability of DHM to Muslim parents, and impact on the clinical use of DHM in Neonatal Units in areas with predominantly Muslim populations. Given the many benefits of DHM, especially in the prevention of necrotising enterocolitis in preterm infants, we believed it was necessary to find a resolution to this situation. In order to facilitate this, representatives from the Muslim Council of Britain (MCB), the United Kingdom Association for Milk Banking (UKAMB) , and the British Association of Perinatal Medicine (BAPM) met at a Round Table Discussion on the 26th April 2015 in London.

Aims: To work together in an atmosphere of mutual respect and understanding to give vulnerable infants the best possible start in life, regardless of their religion or ethnicity.

Summary of Round Table Discussion: The National Institute for Health and Care Excellence (NICE) issued guidelines for the use of DHM throughout the United Kingdom in 2010. These state that every aliquot of DHM given must be traceable from donor to recipient. Participants at the Round Table Discussion agreed that this means that, in the future, should there be doubt about whether a potential bride or groom had received DHM from a particular donor, it will be possible to address this.

The process would involve reviewing the recipient’s medical records, in conjunction with records from the relevant Human Milk Bank, to rule out whether they had received milk from the same lactating mother. In the future, electronic barcode tracking is likely to be introduced. This will make the process more straightforward, and also extend the current 30 year limit for the retention of medical records as mandated by NICE.

Resolution: Concerns about milk kinship should not lead to donor human milk being with-held from vulnerable infants, as there are safeguards in place that guarantee the traceability of milk from donor to recipient.

Approved By: West of Scotland MCN for Neonatology