This Guideline is relevant to neonatal patients in West of Scotland. Staff should ensure they have undergone appropriate training in the use of invasive / non-invasive blood pressure monitors as appropriate. Staff should refer to the relevant drug monographs.

The guideline aims to:

This is a difficult area and causes a lot of confusion.  Paediatric hypertension is defined using centiles from population data1.  The difficulty in defining neonatal hypertension is the relative lack of normal data, particularly in the extreme preterm population.  A significant number of preterm neonates will have disease contributing to or as a result of their immaturity.

For the purpose of this guideline, we recommend that infants are stratified for risk of hypertension, with different ranges according to this risk assessment:

Risk factors for hypertension include bronchopulmonary dysplasia, patent ductus arteriosus, intraventricular haemorrhage (which usually, but not always, occurs in preterm infants) and use of an indwelling umbilical arterial catheters2.  Some term infants may have IVH or need umbilical catheterisation, so risk is not defined by gestational age alone.  By risk stratifying we hope to identify term infants at greater risk of hypertension without committing large numbers of normal babies to investigation.  The high risk group assumes a slightly lower threshold for defining hypertension ie a more sensitive tool for identifying hypertension.  All infants >42 weeks corrected gestational age are considered low risk, and should be assessed accordingly, regardless of risk stratification at a younger age. 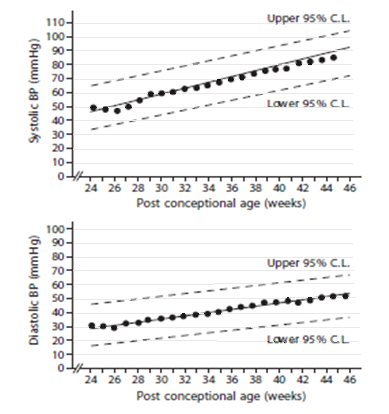 Figure 1 - These graphs use 95% confidence intervals (CI).  Data was measured by oscillometry in infants on day 1 of life.

Although we have chosen to use these reference graphs as the best available it is recognised that this data is over 20 years old and there is no generally agreed upon reference values for preterm infants.  The table below was produced in 2012 by synthesising the limited published data as it was felt this data would be clinically useful.  The values in this table recognise that blood pressure in preterm infants increases more rapidly over the first 2 weeks when compared to term infants3. 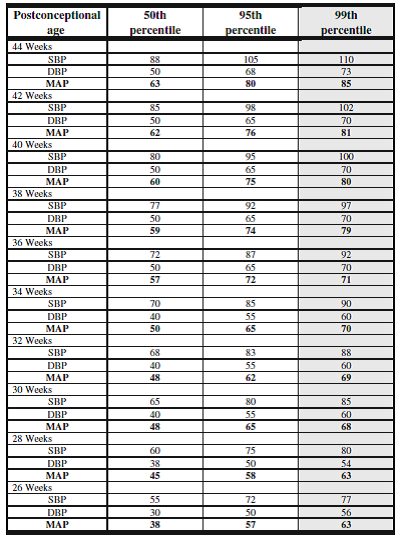 These graphs are taken from the second task force on blood pressure control in children.  Blood pressures obtained using a Doppler instrument. 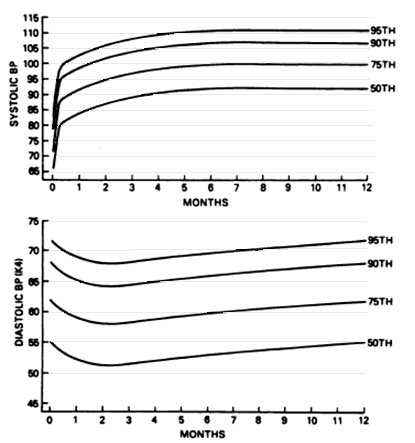 How to measure blood pressure

An indwelling arterial line is the most accurate method of monitoring blood pressure.  If an indwelling is not available then an automated oscillometric device is the next most commonly available method.  When measuring blood pressure, the cuff bladder should measure between 80-100% of the arm circumference and the cuff width should be 40% of that same circumference8.  The baby should be quiet and not feeding.  Feed or medical intervention should have occurred 1.5 hours before the BP is measured and the infant should not be disturbed for 15 mins after the cuff is placed.  Three readings should be taken, at least 2 mins apart14.

Who is at risk?

The incidence of hypertension is thought to range from 0.2% in healthy infants to 2.6% in NICU10,11.  Incidence increases with low gestational age and birth weight and is higher in babies with bronchopulmonary dysplasia, patent ductus arteriosus, intraventricular haemorrhage or those that have required indwelling umbilical arterial catheters4,5.  These are common occurrences in NICU and attention should be paid to blood pressure readings in these patients.

The other potential causes are numerous and some are listed in the table below7,8.  The most common causes are in bold.

Although the incidence is less common than some of the other scenarios listed, renal dysplasia is the commonest cause of severe life threatening hypertension and should be looked for early when severe hypertension occurs.

Renal disease with dysplasia can cause severe life threatening hypertension, which can be difficult to diagnose.  Often these babies present with encephalopathy or heart failure and are thought to have a primary diagnosis of coarctation or cardiomyopathy.  These renal conditions must be considered in the case of an unwell hypertensive baby with a high lactate or neurological abnormalities. A renal USS will provide some information.  A DMSA scan is only useful after 3 months corrected gestational age.

If hypertension is identified, the baby should have upper and lower limb BP measurements and a thorough physical examination looking specifically for murmurs, bruits and abdominal masses.  A look at their kardex for potential drug causes and assessment of their fluid balance is also important.  Initial investigations are listed below.  Note normal urinary protein excretion in neonates is greater than in children13,14.

There is little evidence to indicate the best drugs for first and second line therapy for hypertension in the neonate.  However it is important to have a strategy for severe hypertension which may require to be treated urgently with IV therapy and such an approach is outlined below.

Severe hypertension should always be treated with an infusion titrated on an hour to hour basis according to response.  The aim is for gradual reduction.  Two points of IV access are required so that saline boluses can be administered if there is a rapid drop in blood pressure.  All infusion regimens should be obtained from West of Scotland drug monographs along with potential side effects.  All treatments for severe hypertension require discussion with the duty neonatal consultant.

The main principle in the treatment of non-severe hypertension is to do no harm.  All drugs have side effect profiles and particular attention should be paid to these profiles when the drugs are first used in neonatal patients.

As with the IV drugs for severe hypertension, drug doses and regimens should be obtained from the West of Scotland drug monographs.  Extreme caution should be taken with nifedipine use in neonates due to quick onset and duration of action.  Gut and head perfusion may be compromised if BP drops too quickly.  All treatments for hypertension require discussion with the duty consultant.

Table 3:  Oral drugs used in the treatment of hypertension